Introduction to The Strathallan Story by Robert Kennedy

Somewhere on the ocean floor off Algeria in the Mediterranean Sea lies a once proud passenger liner. Whether it is lying on its port or starboard side or even erect we do not know…. but what we are aware of is a gaping hole at the water line on the port side caused by a torpedo from a German submarine which resulted in the liner capsizing. A few hundred nautical miles away on the same Mediterranean seabed there also lies a U-Boat sunk by depth charges. Both these wrecks are only two of thousands that litter the sea beds throughout the oceans of the world, testament to the famous saying by Scotland’s National Bard Robert Burns…” Mans inhumanity to man”

To a casual diver coming across these casualties of World War 2 they would merely be rusting hulks. He would not know they were intertwined by history.

The liner was SS Strathallan 23,722 tons, built at Barrow-in-Furness, owned by the Peninsular&Orient Steam Navigation Company Ltd and requisitioned by the War Office as a troopship during the war. Its last Captain was J.H.Biggs CBE

The submarine was U562 built at Hamburg 1940. She had been on patrol in the Mediterranean Sea scouting for Allied shipping targets when she was depth charged and sunk by two British Destroyers.

The common denominator the hypothetical diver would not know about, U562 was the U-Boat that torpedoed and sank the graceful liner Strathallan at 2.30am on 21st December 1942 and then suffered the “Poetic Justice” of being depth charged and sunk by HMS Isis and HMS Hursley eight weeks later off the coast of Libya February 1943. On-board Strathallan were over 4000 British and American troops, 250 Queen Alexandra Military Nurses and 872 crew members including the Commodores of the Fleet Staff and Royal Navy DEMS Gunners. She was a mere 18 hours from port of disembarkation Algiers when the torpedo struck. 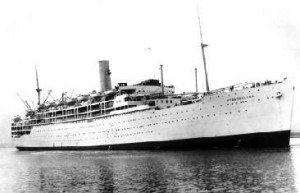 There was no publicity or news reports about the stricken ship. Obviously in wartime, information that could be useful to the enemy was severely censored.

Troops were dispersed, crews were re-allocated and people just got on with the war. the Strathallan becoming just another war casualty of thousands where loss of life was a daily occurrence.

But she lived on in the memories of survivors. Here and there magazine and newspaper articles told the story of some one or other who was on-board Strathallan when the torpedo struck.

Because of the yearnings of 81-year-old former Leading Aircraftman Jim Gormley (RAF Regiment) of Kirkintilloch East Dumbartonshire, who was at the water line on G Deck when the torpedo exploded, to learn about the fate of the ship and casualties this Web Site has come into being.

With the assistance of his next-door neighbour computer enthusiast Robert Kennedy of Kirkintilloch and Les Jones of Neilston (both Scotland) an investigation took place by placing requests for information in newspapers and writing to the Ministry of Defence and other Public Offices the results were astonishing. Included in this Web Site is the Official Report to the Admiralty on the torpedoing of Strathallan by the ships master and extracts from the U562 Commanders (Kapitanleutnant Horst Hamm) log book at the exact time he fired the fatal torpedo. It is published verbatim in German to give the actual words written by the submarine captain. a historic document indeed.

We have actual survivors reports and also people who were on convoy ships.

The Strathallan Story is dedicated to these fine men and women on-board who were on their way to war in North Africa as part of Operation Torch…. the invasion of Morocco…. Tunis and Algeria…. eventually pushing the Afrika Korp right out of the Mediterranean.

A special mention to Jim Gormley (survivor) has to be said who made this web site happen for posterity’s sake so that relatives around the world can learn about these extra-ordinary brave men and women and can share in the memories of their forefathers who contributed to saving the world from the horrors of Nazi Germany. We are indebted to Jim for his exclusive memories.

We just have to study the Holocaust for evidence of the depravity we faced.