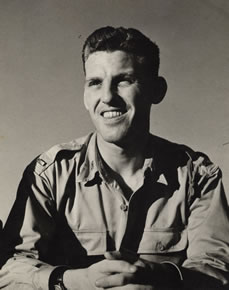 My father as Lt. Buchanan, about eighteen months before the Strathallan torpedoing.

My name is Heydon Buchanan, and I’m the son of Heydon Buchanan who was a young American Infantry Officer on the Strathallan when she was torpedoed. Dad survived the disaster and told me about parts of the incident throughout my early life. He passed away in January, 1991, of a heart attack.

Last night I was writing about my parents’ early life and went to the web to look for verifying info on the Strathallan and Margaret Bourke-White. And, I happily found your site. My father would have been thrilled to see your site and the other survivors’ accounts and possibly to make contact with some of the other survivors.

I’ll now give you the info I received from him concerning the Strathallan, as well as some account before and after the sinking. Sometimes it was difficult to get information from dad concerning the war yet at other times something would spark the need for him to speak about it.

As with so many men and women during WWII, my father rose to the occasion, and it brought out the best in him.  I’m sure that sense of just cause, unity and common purpose contributed to his development during that period.

Dad worked closely with the British throughout the war and had great respect for them. Prior to the Strathallan, he was the first American Officer to attend the British War College so he was already integrated with their military forces and strategies when they sailed from Scotland.

Concerning the Strathallan, the first mention of it from him was about the actual torpedoing-the shock of it. Not that it was entirely unexpected since he spoke of having life boat drills and trying to get people prepared in the event of such a disaster. Still, when it happens, there’s shock.

The second item of note was talk of the Scottish nurses. He always mentioned that with sadness for the ones who drowned, adding the information about the plug or plugs not being put in properly in the life boats. He said, “We lost some of the nurses.” Then more upbeat he would add, “But we did save most of them.”

A group of friends at the British War College: Tom Dustin, Dad, Doug. Stuebing and Larry Wilson. Kneeling are Tony…(?) and Harold Basso. Dad wrote on the back, “Larry and Tony are my roommates. Both are swell people.

He mentioned that he was a troop commander, perhaps assistant troop commander. It was a practice to put some junior officers in charge of those duties during transport. I believe he was a Captain at the time of the voyage.

He was one of the last people to leave the ship, and that may have been in conjunction with his responsibilities onboard. I noticed with interest the survivor account of Vernon Minton as the last person to leave the ship. Perhaps they ran into one another though I imagine the situation was very chaotic. 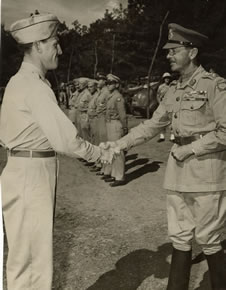 This photo was taken in Italy showing dad with General (Sir) Harold Alexander. According to dad, General Alexander was really the soldier’s soldier. I could tell by dad’s words–as well as the look of joy on his face–that he was happy to have his achievement acknowledged by Gen. Alexander

Dad spoke of Margaret Bourke-White a couple of times…something in conjunction with helping her open her door to get out after the torpedoing. He added that the people in “rooms” had been ordered not to lock their doors-the reason being that in the event such a disaster was to occur, the doors might jam.

I haven’t read all of the survivor accounts yet, but there was another notable person who hasn’t been mentioned. I believe that Kay Somersby-General Eisenhower’s driver and beyond-was also onboard.

For my father, the worst part of the experience was going back deep into the bowels of the ship looking for survivors. There were no lights, and everything was pitch black. The metal all around was red hot from the explosions and fires, so you couldn’t touch anywhere without getting burned. Trying to negotiate that in complete darkness was nerve-wracking to say the least and also with the feeling that the ship could sink at any moment.

In later years I asked him about combat and fear and which was the most threatening situation he was in. He said that those last minutes in the dark depth of the Strathallan were the worst. He was sure he was going to die in the sinking ship.

However, he finally made it out and jumped overboard, hanging onto a piece of flotsam and staying in the water all night before being rescued. Then he was taken to Oran and joined the other forces to fight across North Africa, Sicily and all the way up Italy. 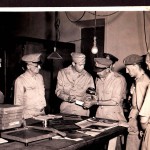 While my father was assigned to the U.S. Fifth Army commanded by General Mark Clark, he was attached to British Eighth Army. Initially an infantry officer, dad also worked a great deal in photographic intelligence commanding a mixed unit of American and British personnel. He spent a lot of time working with Field Marshall Harold Alexander, perhaps as a liaison between American Fifth Army and British Eighth Army.

Title description (“SHADES OF 141”) refers to Force 141—the secret group Eisenhower formed in Algiers after the Casablanca Conference in order to plan Operation Husky (the invasion of Sicily). All pictured were members of the nucleus of that group.

Dad never said much about his awards. Among other recognitions, he received the Legion of Merit for his intelligence work which was of great value in the invasion of Sicily. (I just happened to find the written citation for this award.) One award I could tell he was very proud of receiving was the M.B.E. (Member of the British Empire). The certificate/declaration was made out to him and signed by the King and hung on the wall of his study. He never really told other people about it except for me and a few others who happened to see it. However, once when he and I were in the room talking about the war, he smiled slightly and pointed to the certificate and said casually, “Not everybody got one of those.” It meant a great deal to him, and I have it now, as well as the medal itself 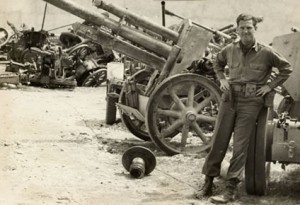 1944 Cassino, Italy. A German gun park. I believe the artillery piece behind dad is the famous “German 88”–a fearful and deadly weapon.

He had the greatest admiration for Alexander or “Alex” as he was known.  My father never spoke badly of anyone in uniform, but a facial expression could indicate his feelings. For example, he didn’t care much for General Patton as a person…so blustery, showy and unnecessarily profane. He mentioned that Montgomery as a person was known to be overbearing and dominating in most gatherings, but when Monty was in the presence of Alexander, there was no question about who was in charge and Monty respectfully took a back seat. Field Marshall Alexander was really a soldier’s soldier, and my father felt that Alex was the best soldier he ever met and knew.

On the American front, dad said that General George Marshall was the best and smartest leader in the U.S. Army. President Roosevelt would rarely let General Marshall out of Washington as he wanted to have Marshall nearby for consultation at all times.

This is the class he was with at the British War College. He is in the front row, first person on the right, a captain then. Second person from the left on that row is Evelyn Waugh, the British novelist and commentator.

Well, that’s about it for now.  May be more information than you wanted, but once I get started on certain topics, it’s hard to set it aside. This history is so important-part of it is family history to each of us but beyond that is the history of the world when it was at such a critical juncture. I hope someday we people of the world can establish that style of unity and common purpose without going to war.

The Journey of one Indiana Family
Dec 25, 2015Les
Leave a reply