Extracts from the Diary of Howard Baker (RAF) Air Craftsman 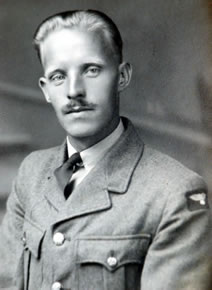 December18th
Weather good, we are all feeling much better now.

21st December
Hit by torpedo from enemy U-boat at 2 25am.2 50 ordered to abandon ship, Went overboard down rope ladder, someone fell and knocked me off into water, went down long way, lost my wedding ring as I came up. Swam away from the ship. Looked for my friend. Heard two gun shots from the ship. Lots of noise, rafts with dead bodies. Held onto the side of a boat full of nurses, eventually they pulled me in and one put her cape around me. Someone in another boat called out on a tanoy do not light cigarettes or talk there is another U- boat near by. picked up by the destroyer Verity at 10 30am .a sailor took my clothes away to dry wrapped me in a blanket and gave me his rum ration .1 30pm arrived at Oran,clothes lost had to land in blanket, saw a plane fly into a mountain, transferred to The Duchess of York for the night.

22 December
Left Oran in The Duchess of Richmond at 5am, chased by U-boats.

26th December
Worked in the yard. Started work in the orderly room.

10th January
Left Hussinday, travelled by train 3 Days and 2 nights from Algiers to Tunis, no sanitation, no food. Flown in DC10 to mobile unit near front, very bad back.
From there went to an island called Cuce,to track invasion of Italy for 6 weeks.
Moved on to Sicily Palermo. Attached to American unit, Hotel good, food good, Steak for breakfast. On to Italy ,Torino, then to Barry. Passed out on parade, sent to hospital put on liquid diet for 3 weeks, discharged.
Passed out boarding ship, spent Oct to March 1943 in Hospital with Hepatitis, Dysentery, and bad back. Returned to UK by Ship to Wilmslow Hospital. Discharged Sent to Stanmore to plot invasion of DoodleBugs.
1 years office work at Insworth.