The Strathallan which took us on our voyage of 12,860 miles

It was on Monday 17th March 1941 that we got our marching orders. After a final parade in the evening everyone adjourned to the NAAFI for a very rowdy sing-song. At midnight we were given a hot meal and then marched to the station. A special train was waiting for us. It was a long and tiring journey through the night, with the carriages entirely in darkness. Early next morning we found ourselves at Liverpool docks where we boarded the P.& 0. Liner “Strathallan”, requisitioned as a troop-carrier, the gleaming white paint of the days when it took people on luxury cruises now camouflaged,
Prom this point in my story I am able to quote freely from the diary I kept at the time (entirely, of course, against the rules !)

Thurs Mar 20    It is pretty crowded and we are in a bit of a muddle at present – have a job to find our way round. There are lots of interesting things – explored it thoroughly on the first day before it was put out of bounds. Moved out of harbour at 1500 hours. All up on deck, band playing. Dropped anchor out in the estuary. Slight swell. Have to carry lifebelts all the time now; boat drills. Several of my mates have got jobs eg police. I did the acquittance rolls (ie pay sheets). Didn’t particularly want much to do. All the same landed in for a guard. They don’t let you forget you are in the army. But it was only a picquet, patrolling the decks to watch the black-out. I made up for it by spending most of the next day in bed.

Sat Mar 22 One of the lads said “It won’t be so bad if the grub keeps as good as it is and the ship doesn’t get any further.” I never had such a ravenous appetite in spite of the liberal food. I have a nice comfortable bunk, top tier, plenty of room….Ship’s wireless usually only on for news. There are awful queues for things in the canteen – not surprising with cigarettes at 50 for 1s.8d.    Two Chappell pianos available – I always .think I’m back at home when I play them.    Hot sea-water showers but fresh water turned off most of the while.

Sun Mar 23    Two chaplains on board – attended parade services. Moved off at 14.45. Wonderful sight. Two of the liners in the convoy glided past us. Hurricanes. Balloon barrage. Narrow shipping channel. Headed West. We thought we could see land at nightfall. We dropped anchor for 24 hours in a bay.

Weds Mar 26 We seemed to go right out into the Atlantic where the water was a deep blue colour. Choppy and very heavy swell. Picked up the rest of our convoy and then further out found our main body-guard, which would certainly give a good account of itself against all comers

Among the ships I noted as being in the convoy were a number of famous liners:
Strathallan Stratheden
Strathmore Strathnavar
The warships included: Denbigh
Warwick Sterling
Andes    Viceroy of India Georgia    Empress of Canada
Orion    Empress of Australia Orontes    Duchess of York Orcades
Otranto 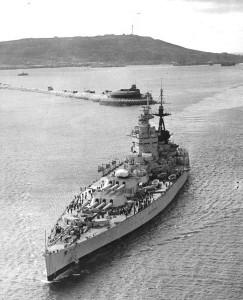 The battleships: Nelson, Resolve and Ramilles and the cruiser Birmingham.

When I was on holiday in Plymouth in September 1936 I saw the launching of the Birmingham, little dreaming that one day I should be in a convoy she was protecting.

We took a zig-zagging course as a precaution against U-boat attacks. As far as one could judge we travelled about 3000 miles West, when part of the convoy continued on to America and then we changed course southwards. As we got into calmer waters and warmer climes we got our sea-legs. My diary notes that I played at one or two impromptu concerts ,did a few guards, continued with my job doing the pay, went to services and discussion groups (Padre Parker), did some reading but all through the war years there were hardly ever any books available and I never saw any music, always had to play by ear.

Tues Apr 1    The great time has come when at last we donned our tropical rig-out. Saw some flying fish. They jump out of the water and fly along like swallows. Wonderful sunset over the water – thin wisps of clouds changing colour and the sun going down very rapidly. The water at night is quite a picture – lit up by phosphorescence like reflected stars.

Lovely scene – high mountains, one-side covered with luxurious vegetation, huts nestling among the trees., Flimsy native canoes soon appeared and were round us all day long, diving for sixpences and selling fruit by means of basket and cord. Was surprised to hear them singing “Hallelujah” and “Ay Ay Ippy”. One canoe had got “Apapa” painted on it (NB that was the name of the boat my Uncle Jack, a missionary in what was then Dahomey, used to travel on out to West Africa). Monkeys on a boat which came out to bring supplies, natives love to get hold of bits of European clothing. One had bowler hat, collar and tie and no shirt. Witnessed a “naval battle” between tvo rival canoeists – pelted each other with fruit – then a chase until one got so much water in his boat that it sank, but he got it up again.    One had some chickens for sale, I got a local coin for my first souvenir. 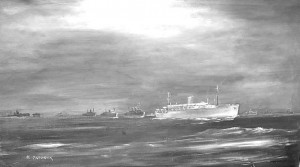 Weds Apr 9. Crossed the line. The traditional ceremony was definitely a highlight – slapstick well acted. Father Neptune had a train o£ mermaids, jailer, barber, surgeon. Offenders were summarily convicted for various offences eg hanging from a yard-arm and pretending was a flag, padre for being drunk and disorderly, wrapping a penny in silver paper and throwing to diving boys; contents of a bucket were thrown over offenders’ heads – lather was not spared The adjutant got a special ducking for making us wear greatcoats on boat drill. The court adjourned and everyone dived in the pool

Good Friday Apr 11 Full moon and diamond-studded sky. North star was low on the horizon and the Southern Cross in sight.

Mon Apr 14 Funny to be going South and yet backs to the sun.

Tues Apr 15,    Half of our friends left us (we learned later that part of the convoy had gone on to Durban). Flags went up. More birds. A few Avros came to have a look at us and then came the great moment once more – land ahoy. Big mountain with white buildings dotted on its slope
Weds Apr 16    Eventually got in dock and after a rush making out passes went ashore with my friend George High from six until midnight. Great town. Lights all on. Big American cars.

This was Capetown. All the service-men who went round by the Cape during the war can never forget the wonderful hospitality offered to us. Everyone was “adopted” by a family for the three or four days we were there. George and I looked round a bit , saw the Houses of Parliament, museum, glorious gardens, luxurious trees, pretty birds, squirrels. There were free refreshments at the Methodist canteen. Sent a cable home. Then a young lady invited George and me to go to dinner. Her parents, Mr & Mrs Heunis, were waiting with a posh car and drove us out to the suburbs. The next day we were given instructions to go out there again on the bus and they took us for a glorious drive right round the peninsula. First view of the Indian Ocean. It was magnificent scenery. I noted seeing locusts, zebras, natives carrying things on their heads. Every car we saw had soldiers in. A fine country, and yet as we looked down from the Strathallan’s deck on to the quay, there was a glimpse of the way Cape coloureds, as they were known as in those times, were looked upon as second class citizens. A group of them during their lunch break from work were squatting down eating chicken bones from a communal cardboard box.

Sun Apr 20, We were off again. The man who loosed the moorings was loudly booed. We didn`t want to go. Table Mountain still in sight at nightfall. A plane dipped to salute us.

The next few days were spent avidly reading all the magazines which had been given to us, then exchanging or bartering them. We rounded the Cape and travelled North. We kept out of sight of land but still saw a few birds, including albatross. Again there were flying fish and porpoises to look out for. As we moved up over the Equator Father Neptune paid us another visit. All the time we were surmising where we were heading for. Trivial incidents broke the monotony – a ship on the horizon…a change of position in the convoy….a few bursts of gunfire, probably aimed at some big fish… red seaweed floating on the sea… Eventually there was a change of direction. The mainland came in sight and we moved through the straights of Aden and up the Red Sea.
Mon May 5, Great experience. Read Exodus 19 and 20 in sight of Sinai.
At Aden there was a great conglomeration of ships, among them the Queen Mary and Queen Elizabeth, which were pressed into service as troop carriers, Arabs came alongside in their flowing robes selling wallets, leather goods etc. The temperature was 109 in the shade. The next few days were spent waiting about but on Sunday May 11 we were crowded on to lighter barges (with everyone bleating like the sheep we felt we were). Our long voyage was over.
It was a sad day when I heard that the Strathallan was sunk off the North Africa coast.
NB Interestingly my parents went over the Strathallan when she was in Tilbury docks before the war and obtained a postcard from which the picture was taken.