We are delighted to share this story sent by Colin Pattrick

For many members of RAF 500 County of Kent Squadron, they found themselves far more in the forefront of Operation Torch, N. Africa than they ever expected. Select members of the ground crew were chosen to head down on the first wave of Operation torch on the SS Strathallan. Not many documents record this first voyage except the official P and O records deep in the archives. 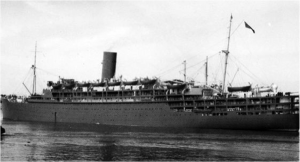 Many lists occur which omit the poor old Strathallan. But go she did from the Clyde on 1st November 1942 with hundreds of other ships. These ground crew were sent to set up new airfields in and around Oran ready for the Lockheed Hudsons and other air support to fly in, in their newly painted desert colours after their last hop from Gibraltar. The ex P and O liner –turned troop carrier had been rigged with several guns dotted around her decks just in case.

For Frederick Arthur “Torso” Bennett and his mate George “ Winkle” Fletcher, both of 500 Squadron, like thousands of others on board, it was a voyage to somewhere unknown until they got closer to the coast. On the evening of the 8th Nov 1942 the ship arrived just off the coast of Arzue Beach near Oran. The Strathallan in fact came under fire for quite a while and returned fire as best she could. She was struck once or twice according to 500 crews but not seriously. 500’s Hudson’s flew sorties overhead of operations along with other squadrons on similar missions.

As evening set in, the RAF men were ordered to clamber over the sides, down the netting and transfer to invasion barges

. Then with the front line soldiers, they to their horror headed in towards the beach still under some fire. They headed in to the Quay at Arzue Beach east of Oran.

About 700 500 Sqdn men in all clambered up the beach amongst first line troops being shot at by French snipers holding out further inland. In fact RAF 500 ground crews were the first British troops to land in North Africa. 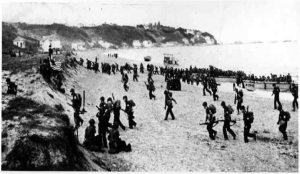 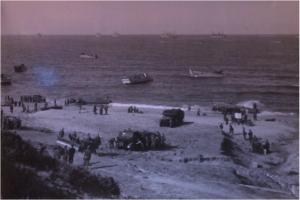 RAF 500 squadron came under attack again later and had to camp on the quay-side with all their equipment for the first two nights. Below is a photo of Frederick Bennett (front row, second from right holding cup) and Winkle Fletcher (front row, second from left) ‘Uncle Bob’ was on the far right. A nice cup of tea on Arzue quayside whilst guarding supplies! 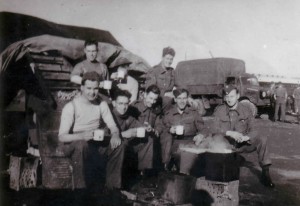 ater as the evening got colder it was recalled that one NCO, posing as a French dock official, had obtained a100 gallon cask of wine from a French ship to help with the freezing cold evening!

Air support for operation torch included 14 Sqdn’s fighters plus 233 and 500 Sdn + others. 500 Sdn’s Hudson air support had gone down from UK to Gibraltar first before the Op started.

On 11th Nov 1942, having sorted the opposition, 500 squadron traveled by US army truck to Maison Blanche and Tafaraoui aerodromes where they spent the first night. They all slept in a hanger with camouflage netting as blankets, pillows and mattresses and where they found a wealth of bugs and wildlife waiting in the dorms!

New Colour for the Hudsons

Later on 12/12/42, the Strathallan Sailed from the Clyde on her second trip to Algeria, as commodore vessel of a convoy bound for Oran. She was carrying 4,000 British and US troops and 250 Queen Alexandra’s nurses including more of RAF’s 500 squadron’s men. Unfortunately, she was Torpedoed: