from Strathallan on 21st December 1942. Stan was the eldest son of Mr & Mrs H.S. Hambrey of Landsdowne Crescent Malvern Worcestershire. Stan has thee honour of being the man who originally proposed the suggestion of convening a Strathallan Reunion taking the shape of a Memorial Church Service at Abingdon Oxfordshire during December 2002 to coincide with the 60th Anniversary of the torpedo attack

His close friend Robin Whitefield contacted the Web Site for support, which was readily given. Regretfully that proposed Reunion did not get off the ground. Coincidentally Stan did his basic training at Blackpool where the Web Site founder Jim Gormley RAF Regiment (LAC) also arrived during 1941. Unfortunately they did not seem to have met. For the first time from Stan we learn the Strathallan Convoy leaving the Clyde Estuary 12th December 1942 sailed round the North of Ireland and down the West Coast rather than the short route south through the Irish Sea.

In all our communications no one has mentioned this before, but it makes sense. U Boats may have assumed convoys would have taken the southerly course on leaving the Clyde Estuary.

Thousands of troops set sail from the Clyde on 11/12th December 1942. I boarded the 23,000-ton ex P&O luxury liner Strathallan. We did not know where we were going but had tropical kit so obviously somewhere hot. We were all in khaki colours. . Army Navy and Air force. We went round the North of Ireland and down the west coast. The sea was very rough. The crew said it was the worst seas for 25 years. I was on H Deck way down low in the bowels of the ship. We had to be on H Deck for our meals of which there was plenty. Some chaps were seasick and did not eat for days. We were battling our way through heavy seas for nearly a week. I spent my whole journey on deck enjoying the fresh air and rough seas but even I got scared when Strathallan rode an enormous wave and shot downwards hitting the sea with a terrific thud causing the ship to shudder and bang. I gave thanks to the British ship builders.

The Bay of Biscay was very rough but when we passed Gibraltar it was much calmer. It was then we learned our destination…Algeria…. hence the tropical kit. The sea was choppy but after the Atlantic it was like a carpet.
On the night of 20th/ 21st December I had slung my hammock in what was the “Housey Housey” room because I could not stand the noise of a lot of sick people down on H Deck

It was quite nasty trying to sleep amid all the retching. No one knew I was sleeping up there except my best mate. We had been ordered to keep our clothes on so I climbed into my hammock fully clothed including my shoes but removed my life belt to use it as a pillow.
I later realised what a mistake that was. I dropped off to sleep and was wakened by a massive explosion that shot me out of my hammock on to the deck. I was in shock with everything in darkness. I felt around for my life belt but could not find it by touch.
I was on my knees and put my hands together and said “ Please God help me”.

I looked up and saw a faint crack of light and made my way towards it and found a way on to the deck. There was quite a bit of panic especially some of the foreign crew. A few were having fits and frothing at the mouth. All I could think of was trying to find something to act as a floating life belt…anything at all to float on. The ship was at an angle listing to port with the deck tilting towards the sea. I was still a bit worried. I saw a rope ladder hanging over the side so began to clamber down to the water where I could not see anything to board so I just climbed the ladder again back on to the deck. I helped another man at this stage that was in the water but came back onboard .Two or three guys were milling around when one suggested, “ Lets go and get some blankets”.

It was very daunting going down below again. I could hear the sound of water swirling around but we eventually found blankets and gave them to chaps who were soaking wet. We went looking for a lifeline of sorts.

Things had quietened down after the first hour so our NCO was trying to take a roll call when a crew member told us to all parade on the starboard side helping to balance the port list..

We all willingly obliged. Some fellow was playing on his ukulele singing away making us all laugh and believe me we needed a laugh at that time.

Daylight came when we were told the ship was not in immediate danger of sinking. I saw a lifeboat being lowered so I jumped onboard and was told by the Bosun to get off as it was overloaded. I was about to tell him I had lost my life belt and could not swim when he reached for his revolver. He had it half way out and figuring he might shoot me I jumped off quicker than I came on.
We were told to queue up for some food and had a light snack of sardines I think.

I resumed my search for something to float on when some one shouted a destroyer had been sighted and eventually it backed alongside Strathallan on the starboard side. It was a considerable height but the warship crew had brought out what appeared to be every mattress on the ship piled high to act as a cushion. We would not have survived landing on the steel decks without broken bones.
I recall like yesterday going over the ships rail where a seaman held on to me. We waited until the Destroyer had gone into its lowest descent in the swell then the crew member shouted “Jump” so I just jumped and thankfully landed safely with the destroyer coming up to meet me where ready hands pulled me off the mattresses as a steady flow of survivors made the leap to safety. Looking back it was a very simple idea but genius at the time. 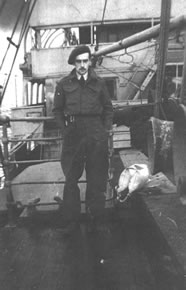 I cant really express the feeling of relief after the uncertainty of what could have happened. The destroyer was indeed a sight for sore eyes and the crew were magnificent.I was safe at last… thanks to God and the destroyer crew. I am still here to tell the tale of the miracle. The Lord God was my life belt but it has taken me 50 years to realise it.

I have often wondered “ Who held me on to the rail before I jumped”. I remember thinking that later as we sailed into Oran. There we boarded an American cargo boat where they showed us excellent hospitality feeding and clothing us. After a day or so we boarded another ship that took us round the coast to Algiers. During that voyage I made sure I was hanging on to a life raft not even thinking of asking our American benefactors for a life belt.

Landing in Algiers we were among thousands of our countrymen and Americans troops where we settled down in preparing for 4 years of war starting in North Africa then through Italy. It was organised chaos but we soon became a proud British Army that eventually chased the Germans and Italians right out of North Africa.

Even as I, and everyone who served in the armed forces, have many stories to tell about a variety of war time saga’s, the Strathallan torpedo that knocked me out of my hammock must be about the most hair raising account of my war experience. Never to be forgotten.
I understand this Web Site goes through out the world with the wonder of the WWW Internet.

May I take this opportunity to send my very best wishes to all my old wartime comrades wherever they may be? I do not have Internet access but would pay tribute to my very good friend Robin Whitefield for keeping me up to date.
Many thanks Robin.